Warning: Declaration of WPDI_Plugin_Installer_Skin::feedback($string) should be compatible with WP_Upgrader_Skin::feedback($string, ...$args) in /home/customer/www/astorybookday.com/public_html/wp-content/themes/mai-lifestyle-theme/includes/dependencies/wp-dependency-installer.php on line 434
 I have four girls and when... - A Storybook Day

I have four girls and when…

one of them yells, “Mom! I found a snake!” you’d think they’d all go running in the other direction. But nope, today when Hannah yelled those words, we all ran to go look – with our handy dandy butterfly net. I was pretty sure it was a garter snake, but we had never found this particular type of snake, so we used a stick to push it into the net.I did look to see if there was a diamond shaped head and eyes and nope, there wasn’t.

Then, we took the snake into the house and put it in the tank with the turtle. I told the girls I would look up the snake online a little bit later (after I finished some chores) and not to pick up the snake until I had determined what kind of snake it was.

A little while later, Hannah comes in the room where I was busy putting away laundry and says, “I couldn’t help it!” and proceeded to tell me how she just had to touch the snake (first with a stick) and no it didn’t try to bite her. So, now the girls are passing the snake, which turned out to be an Eastern Garter Snake around, very excited!

I am very glad we found the snake because now we have another critter to show my Primary Kids at Campmeeting next month. If you homeschool and your child is interested in snakes, here is a nice e-Book about Kentucky Snakes.

Oh, and the girls named the snake “Lucky” because Hannah found it at the same time the cat found it. She said, “I really think God helped me save the snake because He made it and it is special.” Isn’t she sweet? 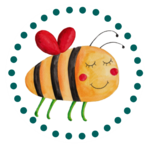 Join a Storybook Day's community where you'll find endless inspiration for creating a joy filled life with your family - because every day deserves a happy ending!

Success! Now check your email to confirm your subscription.

Join a Storybook Day's community where you'll find endless inspiration for creating a joy filled life with your family - because every day deserves a happy ending!

Success! Now check your email to confirm your subscription.